India’s Raw Star Rituraj Mohanty was given a hero’s welcome when he reached Odisha today.

A large crowd of music lovers, well wishers and fans waited outside Bhubaneswar Biju Patnaik Airport to receive him.

His fans jostled with each other to shake hands with him and extend warm greetings as Rituraj stepped out of the airport.

Rituraj sported a broad smile and obliged everyone, including the waiting TV crews.

Soon after his arrival, Rituraj went to Naveen Nivas, the residence of Chief Minister Naveen Patnaik. Greeting him, Patnaik said “I congratulate Rituraj and wish him all the very best.” 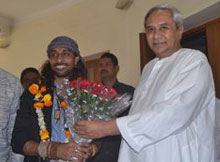 The scene was even more ecstatic when he reached his native village in Nimapada. The entire village came out to greet the son of the soil who made this nondescript village famous with his victory in the reality show.