While watching a Spanish film at Festival de Cannes in 2015, it struck me that one of our very own Odia filmmaker’s film was there in the same section (Un Certain Regard) 20 years back. It was Susant Misra’s ‘Indradhanura Chhai’ (Shadows of the Rainbow).

I had heard about this film long ago from a film-addict in Kolkata. I asked many of my friends and colleagues here in Odisha if they have watched the film, but to my greatest surprise, some people of our generation haven’t even heard about the film. 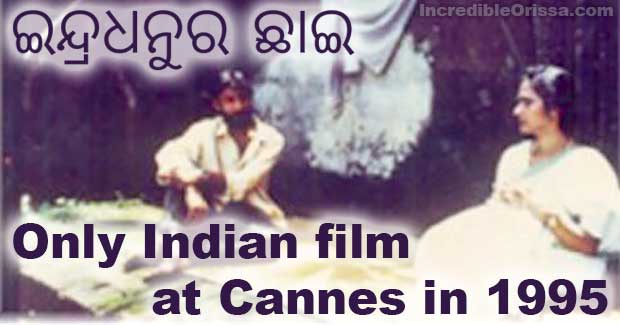 While it was the only Indian film at Cannes in 1995 and had won several international awards and acclaim since then, it’s a matter of sheer negligence that the state has failed to value such an invaluable piece of art.

I was waiting for a good copy of the film, but one night, I decided to play the somehow-restored print as a DVD copy which I managed to find. Of course, the print had some technical problems. But what I saw in it was no less than a very unique piece of art, and something quite admirable.

The city of temples, as we see it now, is very different from what was shown in the film. ‘Shadows of the rainbow’ is not only a shadow of the colors of life, it is a shadow of its time. Yet it’s a timeless creation.

I wrote in my film ‘Capital I’ – “Transformation is visible over a stretch of time, and it’s evident only when it’s complete. We are going through a phase of transformation.” Incidentally, this dialogue was voiced by Susant Misra himself, who played the lead actor in my film.

This dialogue is extremely relevant for ‘Indradhanura Chhai’, because the film contextualizes itself over a city that was fast changing. It was the time when Bhubaneswar was urbanizing, and the characters in the film were always trying to cope up with the changing times. The time has changed today, and when we look back at those changing times, they become much more comprehensive to us, and much more certain. The film, as I see it, is no less significant today, than it was two decades back. And isn’t that a hallmark of a great creation?

The film has many facets to impress film lovers. While most of the films even today, holds on to melodrama and event-packed stories, Susant Misra had the courage to make his debut feature without melodramatic elements or an eventful story. In fact, there’s no ‘story’ in the film.

Three women, tormented in their own way, forms the backbone of the film. Vijaya, a young widow, finds it difficult to start a new life with a local teacher Prataap, characterized as a man of principles. Vijaya keeps referring Nila aunty, a lonely aged lady, as she dreads of Nila aunty’s condition as her inevitable future. The state of the helpless Nila aunty has been beautifully used in the film, often through the subtle verbal references of Vijaya.

Sonia on the other hand, is the most modern of the three lady characters, and she finds herself trapped between the traditional social structure and the new air of modernization. The film paces itself in a very smooth and linear way, yet it unnoticeably strikes the right chords.

All the actors, some of them acting for the first time, have done well. Jugal Debata handled the camera with expertise as he pulled off some visual magic. Chakradhar Sahu’s editing goes hand in hand with the desired flow of the film. Although the film doesn’t bank on events and happenings, it still creates moments of creative magnificence. One such moment is when the red colors of holi splashes and cuts to a dance sequence. It’s a dramatic transition, without any drama. It immediately switches the mood from a very serious note to an enjoyable and festive one. Susant Misra has actually weaved the emotions very neatly and strongly, without anyone noticing it with explicitness.

The best part of the film is the way it ends. I had goose bumps and I’m sure many will. Towards the end of the film, music director Vikash Das pulls off a magnificent composition using classical ragas. It’s a blend of Megh and Miya Mallar. The visuals and the ragas join hands to culminate the film in a heart-touching poetic note. I cannot recall too many instances where a film ends so smoothly without an eventful climax, and yet it shakes you up from within.

One might now raise the all important question – Where can we watch the film? Well, I don’t have an answer. As a lover of cinema, I am much concerned that films like ‘Indradhanura Chhai’ aren’t available in the markets. It is one such piece of art that makes Odisha proud. It has been acclaimed internationally and even today, after more than 20 years, people talk about it. Is it not the responsibility of the state to restore the prints?

One might argue that there’s no point in investing for something that has happened in the past. But I strongly believe otherwise. Films like these are never works of a past, they are the visions of a future. Bhubaneswar is growing smart. Most people can see the shadows of flyovers and shopping malls, but alas, they can’t see the shadows of the rainbow. (This article is written by Amartya Bhattacharyya – Writer & Independent Filmmaker)