International Society for Krishna Consciousness (ISKCON) took out the Lord Jagannath Rath Yatra from Shivaji Park with the participation of nearly half a million devotees in Mumbai on Saturday afternoon.

ISKCON spiritual leader H.H. Radhanath Swami Maharaj performed the ‘maha-aarti’ on the chariot of Lord Jagannath, Baldev and Subhadra before the procession started and ended peacefully.

“On the auspicious day of Makar Sankranti, Uttaraayan which is the time for peace and prosperity, we celebrate the Rath Yatra of Lord Jagannath, as the Sun begins it six-month long northward journey,” Radhananth Swami said.

It returned to Shivaji Park by 6.30 PM on the same route, according to ISKCON spokesperson Lucky Kulkarni.

There will be 56 ‘bhoga offerings’ to the deity at 7 PM followed by ‘Mangal Yagya’ (ritual) by devotees at the Shivaji Park. ISKCON spiritual leader Radhanath Swami Maharaj will address the gathering thereafter.

A spiritual leader of ISKCON said, “The chariot festival of Lord Jagannath is celebrated every year by lakhs of people since ages at Puri in Odisha. Srila Prabhupada, the founder of ISKCON, decided to celebrate the festival all over the world as everyone cannot go to Puri.”

Prabhupada organised the first rath yatra in 1967 in San Franciso. Since then, it is organised all over the world – in the US, UK, South Africa, Europe, Poland, New Zealand, Australia and Mumbai, besides Puri in Odisha. 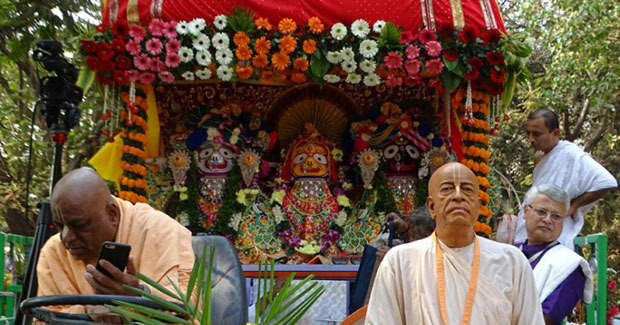