ISKCON organized a Rath Yatra of Lord Jagannath, Lord Balabhadra and Devi Subhadra on October 17 (Saturday) at Morrisville in North Carolina City in the United States.

Holding of Rath Yatra on a self-appointed date in the US has led to severe resentment among the sevayats (servitors) of Sri Mandira – the abode of Lord Jagannath and has as well hurt the feelings of the followers and believers of Jagannath cult.

It is in clear deviation of the Lord’s calendar of events. The scriptures prescribe for holding Lord Jagannath’s Rath Yatra on dwitiya sukla paksha of Asadha month in the Hindu calendar.

Devotees and believers of Jagannath cult and culture from across the world including Odias, pulled the chariot all along a two mile route from the main temple to the Mausima temple to the sound of gongs and mridangam.

Holding of Rath Yatra on a self appointed date been severely criticized by servitors of the Lord and believers of His cult. 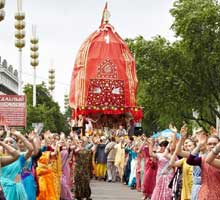 Rath Yatra was first performed outside of India on July 9, 1967 in San Francisco under the supervision of Bhaktivedanta Swami Prabhupada, the founder-acharya of the International Society of Krishna Consciousness (ISKCON). Now the festival of chariots is held in more than one hundred locations around the world.