Story – Ajit Dash and Mahasweta used to work for the benefit of the people. Anubhav played their only son’s character. Asit Pati is younger brother of Ajit Dash and Buddhaditya is his only son. 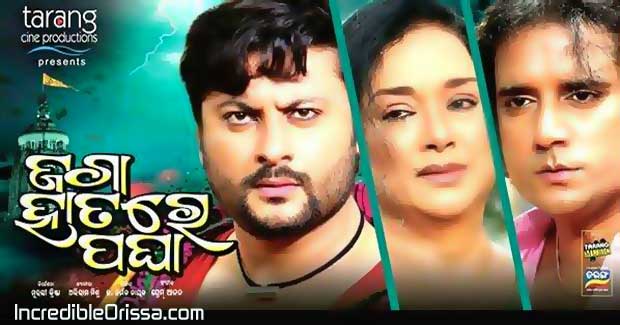 Minaketan lives in Ajit and Mahasweta’s house with his family. Elina played a totally different character in this film. Jhilik is in a village girl’s role.

We can’t reveal full story here. Because there are many turns and twists in Jaga Hatare Pagha.

WATCH VIDEO: Premiere show of this cinema at Brundaban Hall in Cuttack

Performances – Anubhav is in full form this time. Many dialogues of him in the film is clap-worthy. Buddhaditya’s acting and dialogue delivery is also superb in every scene. Mahasweta played her part beautifully.

Elina has proved her acting prowess another time in Jaga Hatare Pagha. Some dialogues of Minaketan can remind you recent controversy of a Bhanda Baba. Jhilik played a village girl’s character perfectly.

Verdict – Prem Anand’s music is a plus-point of the film. Abhiram Mishra’s camera work is also praise-worthy. Choreography is as usual.

Jaga Hatare Pagha is a paisa-vasool movie. Watch it at your nearest theatre in this Durga Puja.