Lord Jagannath’s Daru (Neem tree) for Nabakalebar 2015 has been identified at Kharipadia in Jagatsinghpur, near Raghunathpur.

Chief Administrator of Shree Jagannath Temple Administration (SJTA) Suresh Chandra Mohapatra made the formal announcement on the location of daru of Lord Jagannath this morning. He said as the place where the daru has been located is narrow and situated on the bank of the river, a lot of work has to be made for the easy access of the devotees.

Mohapatra, however, said that the devotees would not be allowed to visit the site for 3-4 hours since the barricading and other ancillary works have begun. 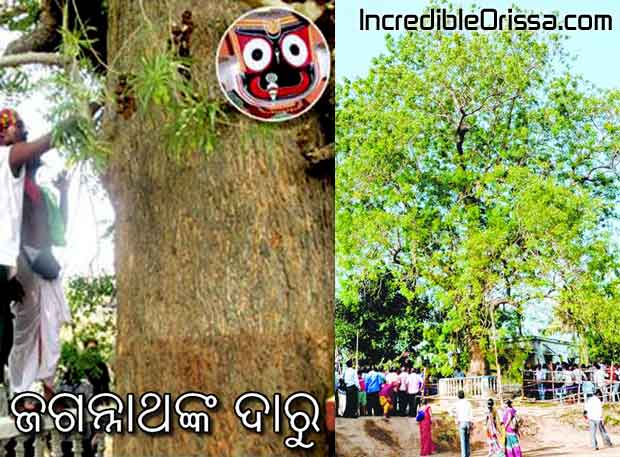 Devotees are coming to the village from everywhere and the local residents are getting used to traffic jams for the first time. Makeshift eateries, tea kiosks and shops selling earthen lamps and other puja material have sprouted overnight at Kharipadia, a non-descript village some three kilometres from the Cuttack-Paradip road.

The crowds are swelling with each passing day and the village is reverberating day and night with relentless sankeertans (singing of bhanjans), the focus of all this being the tree that is the cynosure of all eyes. It has the holy attributes to be worthy of being the Daru Brahma of the supreme Lord.

“The trunk is no less than eight feet in diameter and the tree itself is more than 100 years old. It withstood the super cyclone in 1999 and other storms. It remained unscathed while trees around it were uprooted,” said Raghunath Das, 55, a villager, adding that a small idol of Lord Jagannath was being worshiped under the tree for the past one decade.

While the devotional fervour is reaching a crescendo in Kharipadia, the atmosphere is much like a fair.