Jagannath Daru Sagadi (special cart) resumed its journey from Pratapnagari on Sunday evening and reached at Pandara Square on the Puri by-pass road in Bhubaneswar midnight and the group of Banajagis, escorting the ‘Sagadi’ camped at an ashram in the Jagannath temple here.

The eight km distance between Pahal and Pandara Square presented an electrifying atmosphere amidst playing of cymbals and beating of drums as devotees from all around the Capital turned up in large number to pay obeisance to the Daru of Lord Jagannath.

Huge number of devotees gathered at the site to pull the Sagadi was evoking a feeling of a mini rath yatra. “I felt blessed as I got an opportunity not only to see the daru but also pulling the cart for some time amid such a huge gathering,” said Sangita Sahu, a devotee.

At least 18 platoons of police forces were deployed for smooth movement of the Jagannath Daru Sagadi. Puri by-pass was barricaded and traffic from NH-5 was restricted to the route to avoid congestion. Police Commissioner Dr RP Sharma oversaw law and order situation, traffic movement security setup and instructed police personnel to ensure smooth and hassle free darshan at the site. 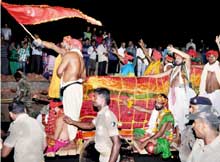 As per the tentative schedule, the Banajgis would halt at Sai Temple on Tankapani road on Monday and then head towards Hanuman temple in Pipili. “We have planned to make it to Koili Baikuntha (Puri) by Wednesday night,” Biswabasu of the Banajaga team, Binayak Das Mahapatra said.