Jagannath Sena, a Puri-based social cultural outfit, demands deletion of objectionable scenes in the new Hindi film ‘Gunday’ where male leads – Ranveer Singh and Arjun Kapoor with others have been shown dancing on the replicas of chariots of Lord Jagannath while wearing their shoes.

The song is Tune Maari Entriyaan.

The Daitapati Nijog, a body of servitors of Shri Jagannath Temple Puri, considered protectors of the Lord, has found the scenes outrageous and an insult to Lord Jagannath. 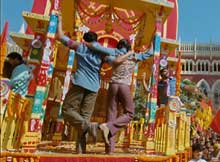 Convenor of the Jagannath Sena, Priyadarshan Patnaik said – such depiction will hurt every Odia.

They urged upon the Shri Jagannath Temple Administration (SJTA) and the Odisha government to take immediate action against the producers of the film and demanded immediate removal of the scenes from the film.