Gajapati Dibyasingh Deb, the scion of the erstwhile Puri royal family, presented a five-point proposal to chief minister Naveen Patnaik to bring about overall development of the Jagannath temple.

The proposal includes propagation of the Jagannath culture, development of the temple periphery, the Grand Road (Bada Danda), Sri Gundicha temple and the Atharanala, the water body at the entrance to Puri.

After presenting the proposals to Naveen at the secretariat, Deb, who is commonly referred to as Gajapati, said: “We will give a new look to Atharanala. People will have a good feeling about the city while entering.” Sources said that around Rs 35 crore would be spent for the water body’s development. It will be turned into a lake, where boating facilities and other amenities will be created. On its both sides, sitting facilities will be installed.

The plan also includes restoration of the mutts that have been intrinsically associated with the Jagannath culture since ages. These include the Uttara Parswa Mutt, Dakishna Parswa Mutt and the Emar Mutt. Steps will also be taken to ensure that the mutts are able to discharge their duties as they used to do earlier.

In the Gundicha temple, the administration plans to install pattachitra depicting mythology in Bhitra Beda. The mural paintings inside the Bhitra Beda of the temple will depict the excerpts from Skanda Purana, mythology of Lord Jagannath for the devotees. The paintings will depict the history of Odisha with special reference to Lord Jagannath on the outer and inner walls of the temple. Development of a garden of Lord Jagannath inside the Jagannath Ballav Mutt as heritage garden and other amenities for tourists and devotees are also included in the programme.

On behalf of the temple management committee, Deb also discussed about the welfare of the servitors that include adarsha gurukulam for children and the housing scheme for the poor. He said: “Under the adarsha gurukulam scheme, free education will be imparted to the servitors’ children. The curriculum will include modern education, Hindu rituals and traditions to create a new generation of servitors.” 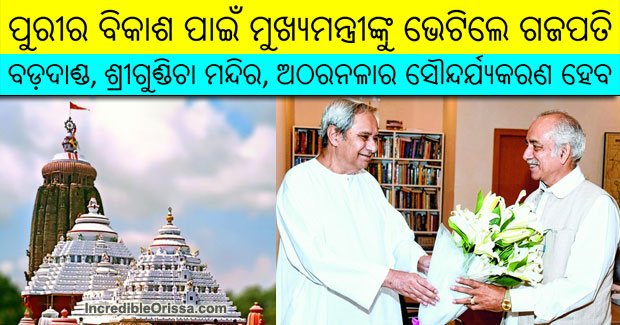