This Jagannath temple in Kanpur can actually predict how good or bad the rainfall will be this year just by the water collected on it’s ceiling!

The temple is widely known as ‘Rain Temple’ and is more than 100 years old. If the size of water droplets is big, it is believed that there will be good rainfall and if it is small, then drought may occur.

Many farmers and people flock to the temple to check the rainfall for the year and make their agricultural decisions for the year. The temple is the Lord Jagannath temple at Bhitargaon Behata in Ghatampur and according to the legend, depending on the size of the water droplets on the ceiling, the rainfall is predicted.

Although many research teams and scientists have visited the place to understand the phenomenon but no concrete conclusion could be drawn. Head priest of Lord Jagannath temple K P Shukla said that the design of the temple is unique in itself.

A large number of devotees pull the chariot of Lord Jagannath and offer prayers in July every year. A fair is also held during Janmashtami. 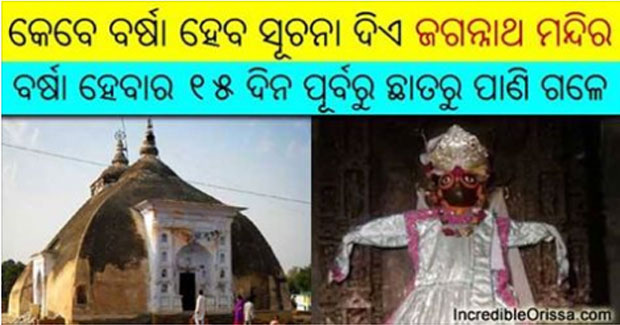