The Jagannath Temple at Puri owns 60,426 acres of land in Odisha. Law Minister Pratap Jena informed this in a written reply to separate questions in the Assembly.

Stating that land of Lord Jagannath is spread over 24 of 30 districts in the State, the Minister said out of 60,426.94 acres identified in the State, the temple administration could prepare final Record of Rights (RoR) of 34,206.73 acres.

Govt has already filed 386 encroachment cases in different tehsils of the State to free it from illegal possession of people and institutions.

Besides, the Minister said the Jagannath temple administration has sold 341.30 acres of land and recovered about Rs 10.64 crores. The amount from the land sale has been deposited in the temple corpus fund, Jena said and added that steps are being taken to dispose of more such land after their recovery. 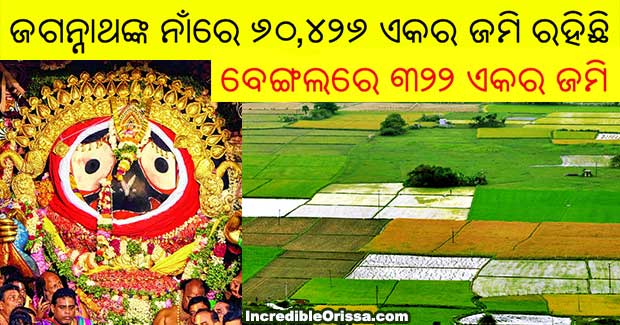