Legendary poet Jayadeva’s epic poem Gita Govinda is being engraved on the rocks at Jayadev Vatika on the foothills of the twin Khandagiri and Udaygiri.

Breathing life into the inanimate art form are a team of ten artistes whose deft hands are carving out the chapters of the poet’s masterpiece which dwells on the divine relationship between Lord Krishna and Radha.

A visitors’ paradise, the theme park is now being developed by the Odisha Forest Development Corporation (OFDC) as a true tribute to the Sanskrit poet. 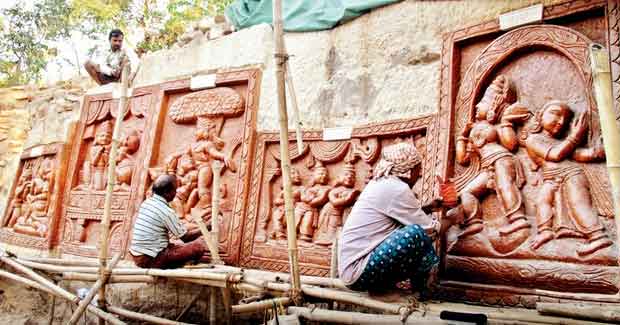 From ‘Samodadamodarah’ to ‘Supritapitambarah’, the 12 chapters (sarga) of the Sanskrit classic are being etched on the rock by award-winning stone carvers who have previously worked at Lalitgiri, the famous Buddhist site in Jajpur district.

“We provided copies of the pictorial descriptions of the ‘sargas’ to 10 sculptors who prepared their sketches and began the carving work about two months ago,” Bhubaneswar Divisional Manager of OFDC Rudra Mani Sahu said.

Three State award winning sculptors Bipin Maharana, Parikshti Maharana and Nimai Maharana are leading the team which is carrying out the rock carvings.

By now, almost 90 per cent of the work has been completed and the OFDC is hopeful of throwing it open to public by the first half of January.