JioPhone made a splash at the Reliance AGM on Friday as Mukesh Ambani took the covers off the long-rumoured 4G feature phone. The handset, introduced as “India ka Smartphone” and launched at an “effective price” of Rs. 0 (though buyers will have to shell out a refundable, upfront deposit of Rs. 1,500 for the device).

The phone will be available from August 15 – for testing, in beta, and will be up for pre-booking from August 24 from the MyJio app and Jio offline stores. Users who pre-book will be able to buy the phone from September, on a first come first serve basis. It will come with a couple of different data packs.

Users can either pay Rs. 153 per month, for which they will get free voice and SMS, and unlimited data (high-speed data FUP is 500MB per day), along with Jio apps. They can also choose to pay Rs. 309 per month to get all this, plus the support for mirroring your screen on a TV, via a cable that can even be plugged into CRT TVs. After three years, you can return the phone, and get a full refund on the deposit. Aside from that, the company will also have two sachet packs, at Rs. 24 for two days, or Rs. 54 per week, for users who don’t want to commit to Rs. 153 as an upfront payment.

JioPhone will be crucial for the company in tapping the estimated 50 crore feature phone users who have not been able to join the Jio 4G bandwagon because of the high costs associated with smartphones.

Although Reliance Jio launched in India in September, the company’s offering has been restricted to smartphone users as it is a 4G only network, and to make calls, a phone has to support the VoLTE technology, which is usually not found on basic phones. The company aims to change that with the JioPhone, which comes with 4G VoLTE support. The JioPhone will include access to apps like JioCinema, JioTV, and JioMusic. 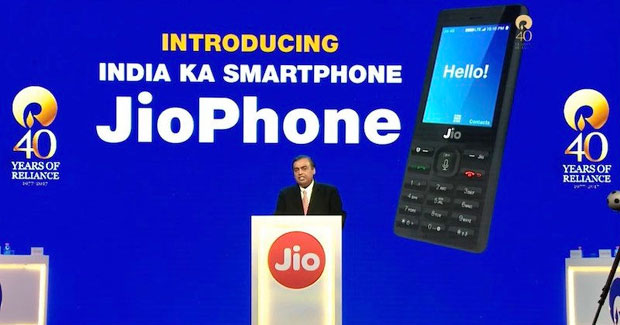