Odisha boy Jyotiranjan Barik has made the state proud by securing All India Rank 1 in the Graduate Aptitude Test in Engineering (GATE) examination 2018.

Jyotiranjan, a student of Odisha University of Agriculture and Technology (OUAT), topped the national level test in the Agricultural Engineering subject with overall score of 959.

Notably, the GATE 2018 was conducted on February 3, 4, 10 and 11. The students aspiring to pursue master’s and doctoral programmes in engineering and technology at Indian Institute of Science and all IITs had appeared the examinations from across the country.

Asked about his aim, Jyotiranjan Barik who is a native of Phulnakhara in Cuttack district says he wants to pursue M.Tech in soil and water conservation engineering from IIT, Kharagpur and then go for PhD to become a scientist.

ALSO READ: Tallest Buddha statue of Odisha to come up in Jajpur 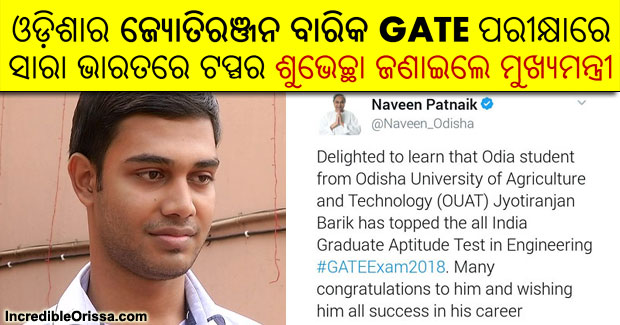