Odisha Chief Minister Naveen Patnaik on Wednesday conferred the award on him. The Kalinga Samman carries a cash prize of Rs one lakh, citation and shawl.

“Trilochan Pradhan is considered an iconic personality and role model for others in the field of advanced scientific research, particularly in the field of physical sciences. The next generation should follow his ideals to spread the wings of scientific temper so that the common man gets the benefits of scientific and technological developments,” Patnaik said.

Since 2010, the Kalinga Foundation Trust has been presenting the Kalinga Samman to people who have contributed to the growth and popularisation of science and technology in Odisha. 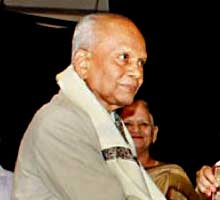 So far, six outstanding people, including Trilochan Pradhan, have been awarded the Kalinga Samman.