After Sarathi Baba, another Baba has come to the fore in Odisha. The man, who is known as Kalki Baba or Bana Baba among his followers, has encroached more than 30 acres of government land worth crores around his ashram near Konark.

As per available information, the Kalki ashram has come up at Darshanibanta situated at a higher plane near Balidokana on Konark-Kakatpur road. The campus features a Shiva temple, a large parking for the Kalki Baba’s cars and many buildings and rest shades for visitors.

“The Baba has encroached 22 acres of jungle land and constructed a temple and other buildings on it. I have submitted my report to the Puri DFO in this regard,” said the Konark Wildlife Range Officer.

The DFO also reportedly promised further investigation and action against the Baba.

During the Shravan month of Hindu calendar when the kanwarias line up to pour water on him like they do on the Shiv Linga.

This fake Baba, locally known as Kalki Baba, has admitted to grabbing about 10 acres of forest land the value of which would be around Rs one crore.

However, Baijayant Panda has denied the statement of Baba on sanction of MPLAD fund. As the MP of Kendrapara, I am not authorised to donate any money from MPLAD fund in other constituency. “May be the Kalki Baba has mistakenly taken my name in place of former Jagatsighnpur MP Brahmananda Panda,” Panda said in a statement. 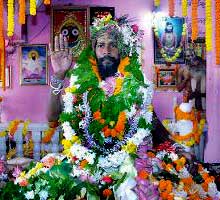 According to the villagers, apart from Baijayant Panda and Sura Nayak, other political leaders like Brahmananda Panda, Bibhu Tarai and Rabi Mallick used to visit the ashram.

The situation remains tense in the area after the Baba’s land encroachment came to the fore, and the Government has deployed force to avoid any untoward incident.