Kamala Pujari from Odisha was conferred the Padma Shri award by President Ram Nath Kovind in the ceremony held on March 16. Pujari was one of the three people from Odisha to be awarded Padma Shri.

Known as the preserver of paddy seeds, Kamala Pujari not only practices organic farming, but has also preserved hundreds of indigenous paddy seeds throughout her life.

Born into a poor family in a tribal-dominated village in Koraput district, Kamala Pujari has always been fascinated with traditional paddy seeds. This led to her cultivating paddy in her land so that she could preserve these grains for further germination.

She took traditional farming seriously and had learnt the basic techniques from the MS Swaminathan Research Foundation at Jeypore, Odisha. After getting the training, she mobilised people, arranged group gatherings, and interacted with people to shun chemical fertilisers. She called many people to join with her and knocked door to door from village to village.

Her efforts bore fruit and farmers in Patraput village and neighbouring villages in Nabarangpur District gave up chemical fertilisers. She formed a seed bank along with the local women in Patraput, with the help of the Swaminathan Foundation.

She also participated in a workshop on organic farming organised by MS Swaminathan Foundation at Johannesburg in 2002. Her efforts towards organic farming were appreciated by the participants across the world. 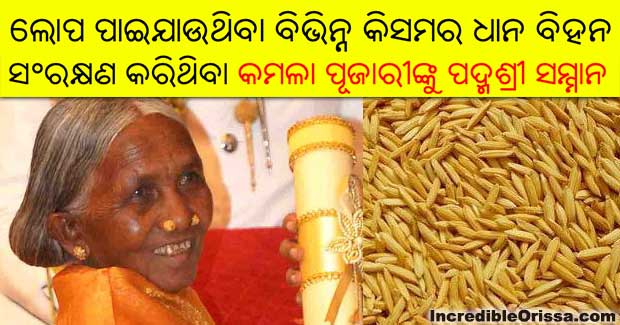