Kana Kala Se is the most popular Odia phrase, used by people of Odisha now.

The phrase has been doing the rounds for some six months now. This Odia phrase, meaning, “what has he/she done!” has gone viral among all age groups. From the gossip groups or khatti, restaurants, train passengers to soaps and programmes on the regional television channels as well as on the jatra stages at villages, the line has become immensely popular among the Odia communities everywhere.

Thanks to social networks, it has also gone global among Odias living in various parts of the world. A distinguishing feature of the ‘Kana Kala Se’ phrase is that it is said in a particular way, and this tone has to remain the same wherever or whenever used.

However, no one has a clear idea as to how this particular tone has developed. 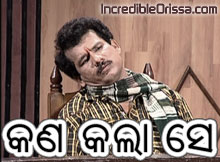 However, the sudden popularity of the Kana Kala Se phrase still remains a mystery.