First BJP, then BJD and now Congress announced their candidates for Kandhamal Lok Sabha by election which was necessitated following the death of the sitting BJD MP Hemendra Singh.

Bharatiya Janata Party (BJP) on Monday approved Rudra Madhab Ray as the party candidate for the Kandhamal Lok Sabha constituency by-poll to be held on 15 October 2014.

Ray was elected BJD MP from Kandhamal in the 2009 elections but was suspended from BJD for alleged anti-party activities during the 2014 polls. 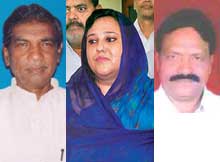 After the announcement of her name as BJD candidate for the by-poll, Pratyusha said that she will serve the people of Kandhamal and would fulfill the unfulfilled dreams of her husband.

The All India Congress Committee (AICC) on Wednesday declared former MLA Abhimanyu Behera as the Congress candidate for the Kandhamal Lok Sabha by-poll.