A group of karate-trained girls in Odisha capital thrashed some eve-teasers and handed them over to the police, who allegedly passed lewd remarks and tried to molest them during Vijaya Dashami celebrations on Tuesday night.

Notably, a group of girls from the Utkal Karate School in Bhubaneswar were on the roads enjoying the Puja decorations visiting the various Mandaps on Dussehra. At around 10:30 pm, they came across of group of boys who passed lewd comments at Baramunda.

Ignoring them, they moved forward to Nayapalli, but the stubborn boys were following them. These boys started their comments and some even tried to molest two girls.

The girls retaliated this time, and initiated their karate moves on them. The boys beat back in response, but some male colleagues of these girls came and joined the fight. Few of the eve-teasers’ group fled the spot, but this team of girls managed to nab five of them and handed them over to the police nearby.

“We have arrested five youths for eve-teasing on Dussehra. Some of their friends are at large. We are trying to get them also,” said Satyabrata Bhoi, DCP, Bhubaneswar.

On Wednesday morning, the girls’ karate coach, Hariprasad, said: “I have come to give a written complaint against the boys who misbehaved with some of my students. Eve-teasing is nowadays rampant in the capital city, and the girls should react to it violently.”

The incident comes days after another student of the karate school, Chinmayee Bhuyan, thrashed three chain-snatchers at the Market Building area. 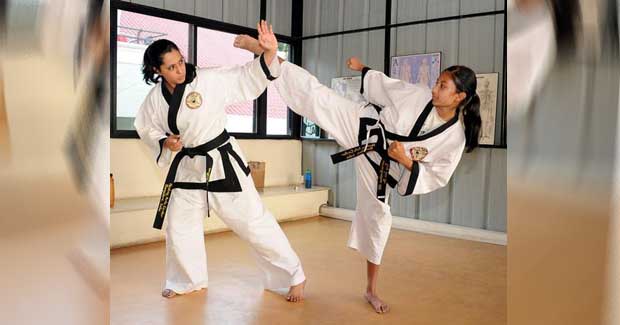