Donning a yellow saree, Karisma did not dissapoint her fans and waved at them with smile. “I am overwhelmed by the love and affection shown by the people of Bhubaneswar,” Karisma said. She also danced on Le Gayee and Main Toh Raste Se Ja Raha Tha song.

Karisma Kapoor, who ruled the Bollywood industry in the 1990s, said she would prioritise her family over profession. “My priority, at present, is my family and my children. I love to spend most of my time with my children. But I have not dissociated myself from acting. It’s in my blood,” Karisma said.

Karisma kept everyone guessing by saying that she would soon stage a comeback with a bang. “I am waiting for the right opportunity. You will soon come watch it,” she said. Karisma parried questions on the controversy surrounding ‘Padmavaat’.

Mohey launched its 55th store worldwide and the first in Bhubaneshwar – the global destination of culture and heritage. A decade ago, Manyavar re-invented the fashion-category, men’s ethnic wear. Today, Manyavar is India’s leader in this sector.

Police in Bhubaneswar had a trying time to tame the teeming crowd on busy Janpath around 4 pm when the glamorous lady reached the venue. Thousands of followers of Karisma laid seige to the arterial Janpath route near Rupali Square much before her arrival. 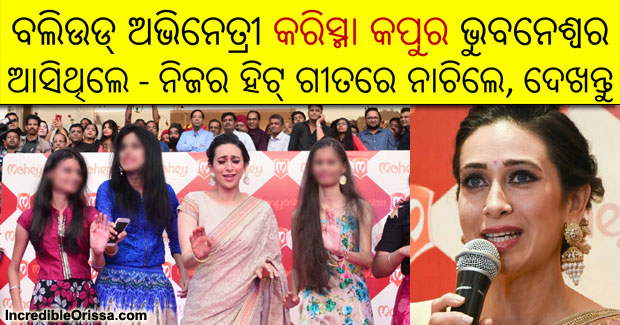