The second promotional trailer of Kehi Nuhen Kahara was also launched along with unveiling of the Music CD. Released by special guest and critically acclaimed ‘I am Kalam’ fame director Nila Madhab Panda, the music was all praises by the film fraternity. 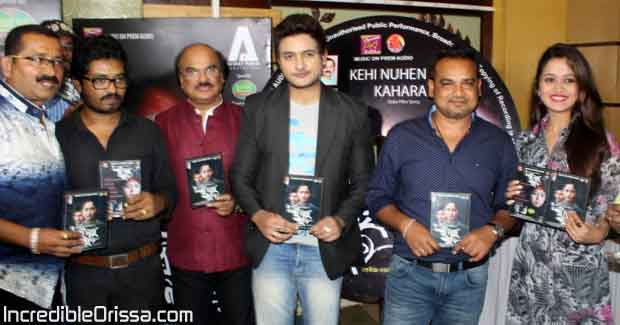 “Ollywood should try to make films in different genres. I have seen the trailer and now the look and feel of the songs are so realistic that I believe this movie will act as a change maker in the Odia film industry. Akshay Parija has always experimented and tried to bring out something new in all his films and I am sure his second commercial venture will definitely be a trendsetter,” said Panda.

“The film’s music is an original score by Biswaswarup. The songs and background scores have complimented the film in every way. The look and feel of the film is very realistic and has a de-glamorised approach and the music has been designed in such a way that it should compliment and not overpower it,” says Sushant Mani.

Young talents Elina Samantray and Abhishek Rath are in the lead roles in the movie which also boasts of screen stealing acts from heavyweights like Siddhant Mahapatra, Bijay Mohanty, Kuna Tripathy, Samaresh Routray, Nitu Singh, Pinky Pradhan and Choudhury Jayaprakash Das and is slated to release on 2nd October.

The event saw eminent Odia celebrities from the film circuit and the entire media appreciating the efforts in the film making.

Owner of Prem Audio, Sanjay Naik says – “With ‘I Love You’ Prem Audio was born and had started the trend in the romantic film genre where others followed suit. Now, every Odia movie is in some or the other way a remake of south films. I believe by being associated with this film we would break that trend and start another genre of film making in Odia film Industry,” who carries the onus of film distributorship.

The film showcases many new talents in acting as well as in technical segment, Parija added.