Visitors to the Sun Temple at Konark will soon have access to world class tourist facilities and an interpretation centre.

The CEO of Indian Oil Foundation (IOF) Subrata Barma said to make the visit of tourists to Konark comfortable, waiting lounge, water points, snacks counter, rain shelter, landscaping and toilet blocks have been created along with a 60-seater auditorium, where animated films depicting the origin and history of Sun Temple will be screened.

An extensive main parking area spread over 5 acres has been developed for tourist buses. Nearly 60 buses can park at a time at the facility which has modern washroom, relaxation facilities and snacks counters for drivers and commuters.

With the Sun Temple being one of the most visited tourist attractions in the region, the IOF has also developed an interpretation centre. Spread across 8 acres the centre has a new-age museum, which would enhance visitors’ intellectual and emotional connect to the site, he added.

Having five galleries depicting the history, culture and architecture of Odisha, the interpretation centre also features galleries dedicated to other Sun Temples of the world. Touch-screen kiosks and multimedia depictions, together with sculptures, scale models and artefacts in the galleries make for fabulous viewing.

Developed by Indian Oil Foundation (IOF) at a cost of Rs 45 crore, the state-of-the-art facilities at the only world heritage site in the State, will be inaugurated by Union Minister for Petroleum and Natural Gas on April 1. 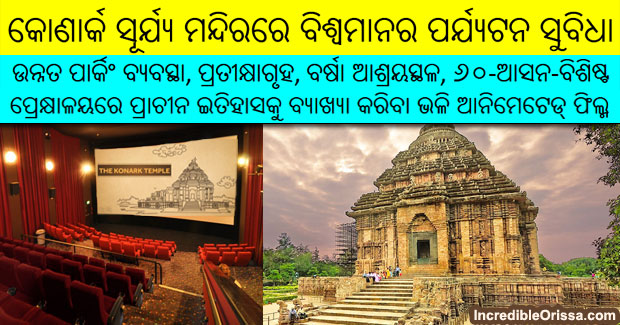