Her screen name is ‘Mituna’. She is the daughter of village sarpanch Nagarjuna Samantray, played by Mihir Das in film.

Nagarjuna has seen many dreams for her loving daughter that she will get OAS or IAS and become Collector one day. But Mituna choses teacher profession.

Shibu Shankar Ransingh (Papu Pam Pam) is a brave boy of the same village and falls in love with Koyel.

Mituna’s father and brother Bhujanga Samantray (Hara Rath) come to know about the matter one day. They threaten Shibu that he is not same as them in social status. So he must leave Mituna.

But Shibu does not agree with their proposal and fight for his love. 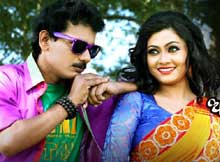 Papu is also producer of the film.