The movie is based on pure divine relationship of God and his devotee. Simultaneously, there is also a love-story.

Krishna Govinda is directed by T Ganesh, produced by Satyakant Sahu, music composed by Chandrakant Sutar and dialogues are written by Nirmal Nayak. 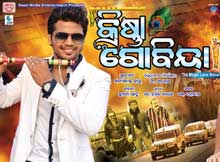