He sang some bhajans and some of his hit hindi songs at this event.

“It’s a great honour to be awarded at Lingaraj temple on the occasion of Maha Shivaratri”, he said.

“I am making a comeback in the Hindi film industry and will be singing regularly for Bollywood from now on in a number of new films. My next film is ‘Dussehra’ and at least 50 more films are lined up”, he added. 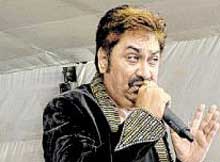