Sashimani Devi, the last surviving Devadasi of Lord Jagannath, passed away at her residence in Dolamandap Sahi, Puri on Thursday. She was 92 and was ailing for the last eight years due to old age related health problems.

With her death, the traditional Devadasi service to the Lords has come to an end. Sashimani Devi was the Mahari sevika (servitor) of the Lord.

At the age of 12, Sashimani was inducted into Devadasi Seva after being ceremonially married to Lord Jagannath. Her duties included dancing before the Lord during Chandan Yatra, Nanda Utsav and Jhulan Yatra and singing the Geeta Govinda.

“She stopped service around six or seven years ago. Though another devadasi, identified as Parasumani Devi is still alive, she discontinued her service long ago. Sashimani was the last surviving devadasi,” said Jagannath Temple’s spokesperson Laxmidhar Pujapanda.

Her mortal remains were consigned to flames at Swargadwara and as per the temple tradition, servitors brought the holy fire from the temple to ignite Sashimani’s funeral pyre.

The Devadasi tradition was an integral part of the Puri temple culture dating back to the temple itself. A girl would be married to Lord Jagannath and sing for the deity on special occasions, while some would dance in private for the Lord. The devdasis remained the wife of the Lord and would adopt a girl child, who succeeded them and thus trained in dance and music by them. There used to be more than one devdasi at any time in the temple. 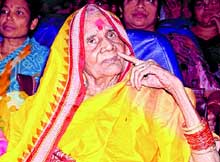 Temple sources said more than 50 devadasis used to be attached with the temple in the past. But with time, many got married and others passed away. The decline of the devadasis – or Maharis as they are known in Odisha – is believed to have started in 1955, with the state government taking over the temple administration from the royal family.