Laxmi Panda was one of the youngest members of Netaji Subhas Chandra Bose’s INA (Indian National Army) and the only Oriya woman to have enlisted.

Laxmi Panda was born in 1930 near Rangoon where her parents were engaged in the Railways. She had early memories of the exploitation of the workers by the Gora Sahibs, and clearly recalled that she too was engaged in the job of cutting grass for the horses of the white supervisors. When the Japanese overran the parts of Burma in 1942, British air bombardments became a daily routine. Her father was a soldier of Subash Bose’s Indian National Army, and both her parents were killed in a British air raid. The young Laxmi and her younger brother became orphans. They were mute witnesses of the death of their parents.

The determination to avenge the death of her parents made her go to the nearby INA Camp where she begged for enrollment in the rank and file. The frail Laxmi was hardly fourteen years of age, and was refused by the Camp commanders. However she stayed outside the Camp gates, and when Subhash Bose came for inspection she blocked his way. She was personally taken aside to him, and her determination melted the hearts of the INA leaders. She was taken in the Rani Jhansi Regiment under Captain Lakshmi Sehgal.

Initially she was given soft jobs of housekeeping and cooking, but the young Laxmi Panda soon proved her mettle and won the hearts of her superiors. She trained in swordsmanship, shooting and espionage. As she was well versant with the Burmese Language, she was often sent across enemy lines for collection of intelligence. She was working with the famous Janaki Thevar, Gown, Shah Nawaz Khan, Sehgal and Dhillon.

Laxmi Panda recollected that, Netaji personally gave her a new name ‘Indira’, to avoid confusing her with the famous Captain Lakshmi Sehgal. Netaji told her that in the INA she would be henceforth known as Indira.

Six months of intensive arms training in Burma shaped Laxmi into battle readiness for the onward march to the battlefront on the India-Burma border. Laxmi Panda recalled how Netaji had instructed her regiment to break into groups of 150 to move out of Rangoon when the INA was retreating. Laxmi Panda was in the second group that was led by Janaki Thevar and had a rough retreat, their train was bombed and the women had to walk to Bangkok-it took 26 days of night marches braving bombs and machine guns firing at them. Food was scarce, they ate roots and boiled leaves. Many a time they went hungry for days, even eating the flesh of the pack horses that had died.

She married another INA veteran Khageswar Panda in 1951. She was a brave Oriya lady, who had fought alongside Netaji and Lakshmi Sehgal in Burma and had survived to come back. 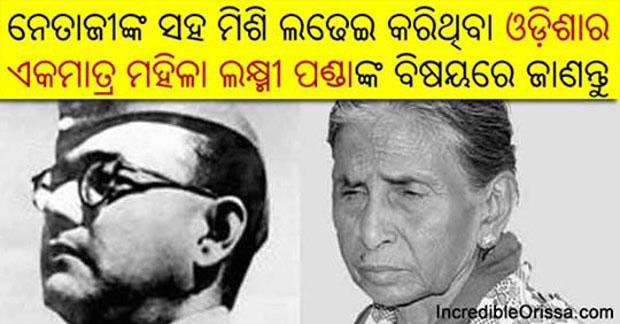