Prime Minister Narendra Modi’s 25-minute visit to the Lingaraj temple gave a global recognition to the shrine. Modi himself had tweeted about the architectural grandeur and posted the photos on his twitter handle.

Never before in recent times, Odisha’s temple heritage, mostly the architectural marvels and intricacies attracted global attention as much as it did during PM Narendra Modi’s visit to Lingaraj Temple on Sunday.

Prayed at the Lingaraj Temple in Bhubaneswar. The magnificence of the Temple and Temple Complex leaves a lasting impression on the mind. pic.twitter.com/ofoXs8rltr

WATCH: All videos of PM Modi’s visit to Lingaraj temple

Modi, who was in Bhubaneswar to attend BJP’s two-day national executive committee meet that ended on Sunday, offered prayers and conducted a puja at the 11th-century shrine in the morning.

A number of people, who were unaware of Lingaraj Temple, replied to Modi’s tweets on Monday. “Wow, what a beautiful temple it is. In my lifetime, once I have to visit. Thanks Modiji for sharing pictures of the temple,” said a tweet by one Ramrao Kulkarni. Modi replied to Kulkarni’s tweet and wrote: “You must! And you must also visit other places in Odisha. The state is blessed with excellent history, culture and warm hearted people.”

Tour operators said a few minutes visit of Modi to Lingaraj Temple and worldwide publicity of his photos in the shrine via internet gave much-needed impetus to the Odisha Tourism.

“Modiji did what the Odisha government failed to do despite several paid publicity advertisements in newspapers and campaigns. Our tourism product got a free publicity through Modiji’s visit,” said Debasis Mahapatra, who owns a travel agency in Bhubaneswar. 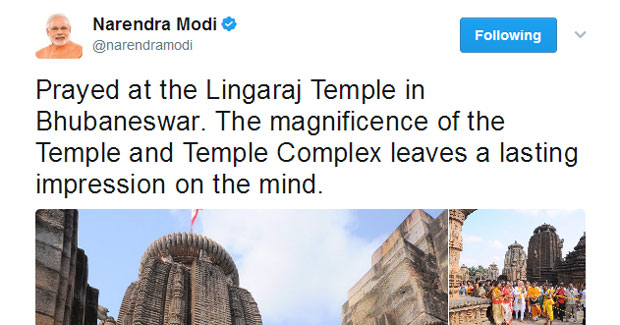