Odisha Tourism is currently enjoying a huge visibility on the streets of London, thanks to a new mode of branding launched by the state tourism department – ‘Bus branding’.

The Odisha Government is taking over buses in London to promote the 2018 Men’s Hockey World Cup to be held in Bhubaneswar and the exotic tourism in the state. The campaign titled ‘Odisha by Morning, Hockey by Evening’ features branded buses showcasing the state as an exciting tourist and sporting destination.

The state is known for being the ‘Cradle of Hockey’ in India with maximum number of players in the Indian hockey teams. The state further boasts of being the title partner for the Men’s Hockey World Cup 2018 while Odisha Tourism is the host partner of the event.

The Men’s Hockey World Cup 2018 is an exciting opportunity for the state to reveal its beauty, as thousands of fans from across the globe and across the country are expected to come in for the event. Through the campaign, the state aims to showcase that it is not just a sporting hub, but also an amazing tourism destination.

The bus advertising activity forms part of a wider marketing campaign for the Men’s Hockey World Cup 2018. Vishal Dev, IAS, commissioner-cum-secretary to government, Sports & Youth Services Department and Odisha Tourism, Government of Odisha said: “The campaign is a compelling combination of sports and tourism which is exactly how we want to showcase Odisha to the world.” 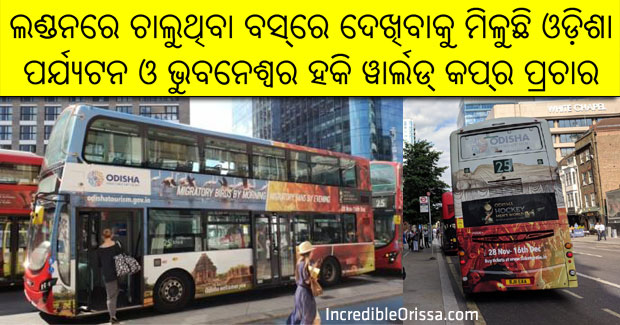