The biennial festival of Maa Budhi Thakurani, popularly known as Thakurani yatra, began in Berhampur from yesterday. The festival will continue till 27 April 2015.

Budhi Thakurani of Berhampur or goddess Mahamayee is venerated as much as Biraja is deified in Jajpur district, Bhagabati in Banapur and Kataka Chandi in Cuttack. Thakurani yatra in its ancient form is similar to ‘ghata yatra’ or the pots festival of south India.

According to some historians, the cult of Budhi Thakurani originated along with the establishment of Berhampur town around 1672. 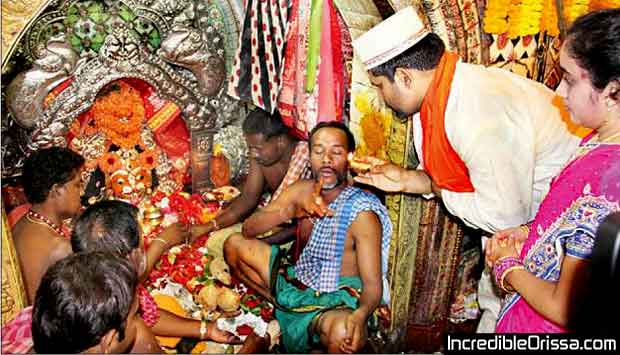 The Telugu Lengayat Dera (weaver) community, who came to Mahuri on the invitation of the Raja Saheb of Mahuri, started their Ghata yatra (pot festival) to highlight the divinity of Berhampur’s Mahamayee Thakurani.

Dera community chief Kota Chandramani Kubera Senapati led the people of his community to migrate to Mahuri and Berhampur where they continued to pursue their ancestral profession of weaving tussar silk products or patta matha.

The ghata yatra was initiated for the purpose of highlighting the tradition of worshiping Thakurani as well as to use it as a platform for sales promotion of their silk products.

The date of the Thakurani yatra was fixed by the yatra management committee and the district administration gave its nod to the festival. Budhi Thakurani is considered the daughter of Desi Behera and the deity stays with her father’s family during the period of the yatra.

Lakhs of people from different parts of the state and even outside Odisha congregate in Berhampur to witness Maa Budhi Thakurani yatra, sources said.