Today devotees did not get ‘Mahaprasad’ in Jagannath Temple as the Suar and Mahasuar Nijog (association of servitors engaged in cooking prasad) of Jagannath Temple on Sunday announced its decision not to cook Mahaprasad from Monday protesting the arrest of a servitor.

Sale of Mahaprasad other than in Anand Bazaar has been prohibited in accordance with High Court directives.

A Justice of the honourable High Court, during his recent visit to the temple had seen a servitor selling Mahaprasad in the bhitara bedha area of the temple. As he informed the matter to the temple administration, the servitor was arrested and his Mahaprasad seized.

After Sahana Mela (public darshan) on Saturday morning, the Suar and Mahasuars did not allow Rosha Homa (a ritual that is carried out before cooking) to be performed. As a result, Ballav (breakfast) and other rituals including lunch for the deities could not be prepared.

It was only after the servitor was released on bail, the servitors allowed ‘Rosha Homa’ at 3.45 pm. The breakfast and lunch were offered to the deities at 6.20 pm.

Lord Jagannath and his siblings had to go without food for nearly six hours on Saturday due to the cease-work by Nijog.

In a letter to the Chief Administrator of the temple on Saturday night, president of the association Bhagban Suar said the cooks have been protesting restriction imposed on sale of ‘Mahaprasad’ in the ‘Bhitar Bedha’ of the temple. 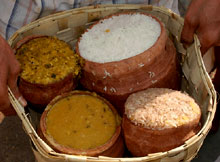 Around 50 Nijog members cook Mahaprasad at the temple every day. The shrine kitchen, which prepares Mahaprasad for over 10,000 people on a given day, is considered the biggest temple kitchen in the country.