The prestigious ‘Mahari Samman’ for the year 2014 would be conferred to renowned Odissi danseuse Madhusmita Mohanty on the concluding day of the Guru Pankaj Ustav at Rabindra Mandap on March 17.

The award, instituted by Adiguru Pankaj Charan Das, carries a cash prize of Rs 50,000, a citation and a plaque. 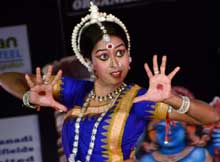 The four-day dance festival, beginning from March 15, would be jointly organised by the state Culture department and Guru Kelu Charan Mohapatra Odissi Research Centre on the occasion of the 95th birth anniversary of Guru Pankaj Charan Das.

Several well-known dancers from and outside Odisha would perform at the festival.