The 8-year-old girl from Odisha’s Kendrapara, Mamata Dalai, will get the ‘Jeevan Raksha Padak’ from President of India on the occasion of Independence Day this year.

The award will be given to Mamata for showing exemplary courage and presence of mind in saving her elder sister Ashanti from a crocodile’s mouth while they were taking bath in a village pond on April 6, 2017.

The Union Home Ministry had sent a cheque of Rs 1 lakh to Mamata and the district administration presented it to her on Friday. She had earlier won the National Bravery Award, 2017 during the Republic Day celebration.

Established on 30 September 1961, the Jeevan Raksha Padak is a civilian lifesaving award, presented by the Government of India, to reward person saving lives from drowning, fire, or mine accidents.

Bankual village erupted in celebration as the news of Mamata’s selection for the award spread. “Since morning, villagers in large number are thronging our house,” said Mamata’s mother. Currently, Mamata studies in Class III of a private school in Bhubaneswar.

ALSO READ: Odia University to come up at Satyabadi in Puri district of Odisha 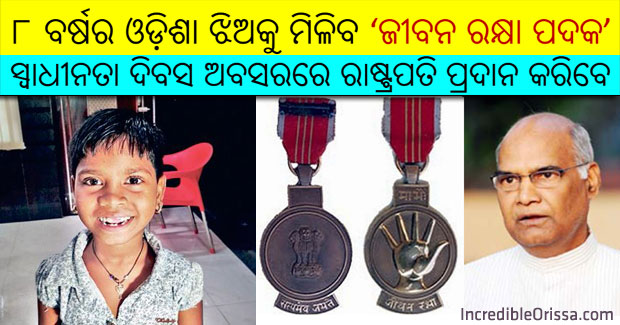