She was 48. Mamina famous for her comedy roles. She was suffering from severe diabetes and ill for the last few days.

As soon as news of her death spread, personalities of television and film industry poured in to her Shankarpur residence to pay their last respects. She has acted in over 150 films.

She acted in ETV Odia’s popular serial Tulasi in an important character. 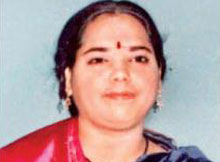 She was a spinster and was living with her brother’s family.

Mamina’s death has come as a huge jolt to the Odia film industry, which recently lost another female comedian Runu Parija.