She is a +3 1st year commerce student of Kalinga Institute of Social Sciences (KISS) in Bhubaneswar. She has come from a very poor Kondh family from Ludhipada village of Bolangir district of Odisha. Father Rajiv Majhi and mother Rama Majhi are very poor. They depend on agriculture for their livelihood. 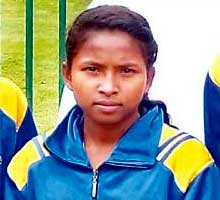 Founder of KIIT and KISS, Achyuta Samanta congratulated Mandakini and wished her success in SAF Games. It is a matter of pride not only for KISS, it is good news for Odisha and entire tribal community opined intellectuals.