Manjulata Panda, a completely blind woman from Odisha, successfully completed her PhD in Political Science, thereby becoming the first visually-challenged woman in the State to be awarded a doctorate by the Utkal University.

She expressed her gratitude to Dr Smita Nayak and Dr Asha Hans for extending support for her success. She may not be able to see. But that hasn’t dented her spirit to live her life to the fullest like others.

Manjulata, whose brother is also visually-challenged, proved her excellence in communication skill by presenting papers at the international conference conducted by the Ravenshaw University, Cuttack on 9th and 10th December 2013. She has completed her MPhil from the Sambalpur University.

Her father late Sanat Kumar Panda was an Assistant Manager in rerolling mill in Hirakud and her mother Kamala Panda is a house wife. Despite of blindness and acute shortage of study materials Manjulata created a new history for all other visually impaired lady in the state after completion of her PhD from Utkal University.

“She deserves gratitude from the entire academia of the State. She has proved her excellence despite being visually-impaired. Her success has set an example for others,” said ISWAR general secretary Sanyas Kumar Behera. ISWAR is an organisation working for the cause of disabled, particularly blind people. 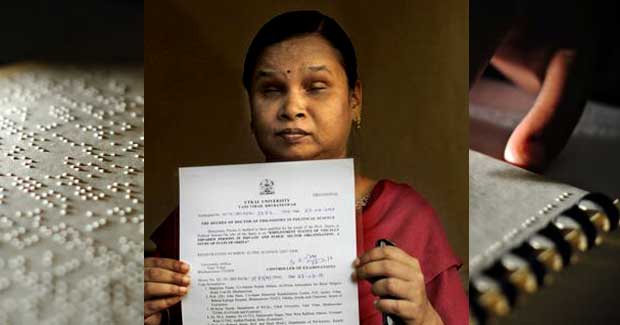