She received cash award of Rs 2 Lakh, besides accolades from the judges like Salim Merchant, Vishal Dadlani, Sonakshi Sinha and film celebrities like Anil Kapoor, John Abraham and Shruti Hasan.

Out of one lakh contestants, Marmasparshi Das (15) was chosen among the top three finalists and was invited to Mumbai for the final competition. With her splendid performance, Marmasparshi left the two other contestants from Lucknow and Mumbai behind and won the competition.

An avid singer, Marmasparshi Das, who is training in Hindustani classical music, is also good at chess and poetry recitation. 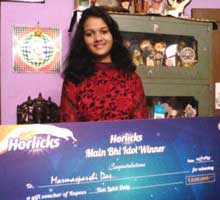 A fan of Lata Mangeshkar and Shreya Goshal, Marmasparshi Das wishes to continue her passion in music. “My aim is to serve the society. So I want to be an IAS officer,” she said.