Holding rallies, demonstrations and organising marriage processions is now going to become a costly affair with the Bhubaneswar Municipal Corporation (BMC) managing to secure an approval from the government to levy administrative charges or user fees for these activities.

For marriage processions, the BMC has been empowered to collect sanitation and administrative charges of Rs 5,000 a day. The amount is to be paid at the respective zonal office of BMC.

Santosh Rout, who plans to organise his brother’s barat in the city in January said instead of charging a huge some of money, the BMC should ask the wedding organisers to clean up the mess created by them. “If they fail to clear the garbage, then a penalty is justified. Rs 5,000 is too much and will affect the middle and lower-middle income groups,” he said.

The state capital hosts thousands of demonstrations and rallies around the year with various groups of agitators engaging themselves in week-long and month-long stirs especially at the Lower PMG Square in Bhubaneswar. Protests are populous affairs and the BMC often finds itself having to clean the mess generated by such agitations.

According to the plan, the BMC will charge a minimum amount of Rs 500 however small the size of the agitation may be. But if the people involved in the agitation crosses the 100 mark, Rs 1,000 a day will be charged. If the number of people taking part in dharna exceeds 500, then the charge will be calculated at Rs 5 per head per day. 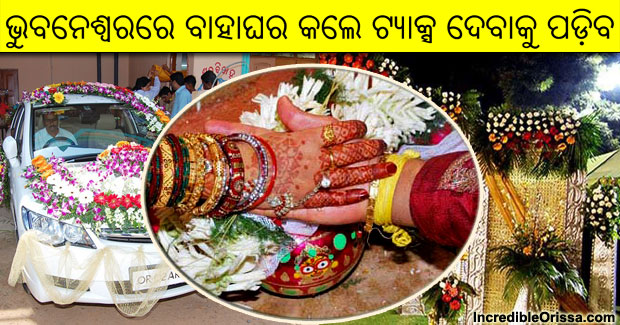