At least 5,92,281 students would appear for the State matriculation examination (Class X) this year in Odisha, which is about 8,000 less than the number of students that appeared last year.

The Board of Secondary Education has decided to undertake special measures, so that the matriculation examination starting from February 23 can be conducted smoothly.

At least 302 nodal centres have been identified across the state by the Board of Secondary Education for safe custody of matriculation question papers.

Sealed questions paper packets will be stored at the nodal centres and just a day before the exam, the booklets will be dispatched from the nodal point to the exam centre along with police escort.

Steps are also being taken to identify centres located in sensitive and hyper-sensitive areas, and a provision is being made to record the entire examination proceeding at such centres.

Officials of the board also implemented a change in the roll number pattern for the first time. 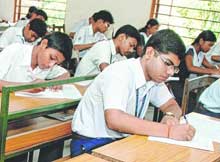 An eight-digit number will be used in which first three digits will define the school code, the next two digits (alphabetical code) will represent the district and the remaining three digits will be the roll number of the student.

The board will start distributing admit cards to students from 10 February 2015.