The song has a patriotic flavour and has a deep meaning, especially the line ‘Mera koi dharam nahin tha jab main chota bachcha tha’. It touches one’s heart and soul.

“Ram sir called me in to sing ‘Maula’ and said, ‘Pehle lyrics ko samajh aur phir gaane ko bus phaad de’. I wasn’t getting the feel of the song the first time I sang it. I tried to understand the lyrics over time. I went back to my childhood and related my memories to what the song meant. It sums up the story of Bangistan,” Rituraj Mohanty said about the song. 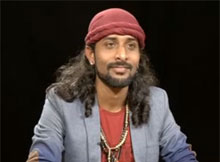 “When we are kids, we don’t make distinctions between people but as we grow up, all kinds of divides arise. However, God is one, and people have different ways of approaching him. I haven’t seen God, but there must be someone who stirs the leaves, who looks after all beings, who gives us rest at night. Once I got this, the recording went smoothly,” Rituraj Mohanty added.