Do you know, how classic evergreen Odia song ‘Mayuri Go Tuma Akase Mu Dine’ was made?

This track is recorded in voice of legendray singer of Indian cinema, Mohammed Rafi, composed by Shantanu Mahapatra and written by late Jibanananda Pani. 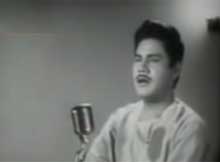 Dhiren Patnaik is the producer of the movie and made all arrangements to record this song in voice of Rafi.