The Mahanadi Coalfields Limited (MCL) will soon start construction of the medical college and hospital at Talcher of Odisha as all the necessary formalities have been completed to set-up state-of-the-art health institution.

MCL, the subsidiary of Coal India Limited and second largest coal producer and major contributor towards social upliftment in Odisha, had envisaged an ambitious CSR project of setting-up a 100-seated medical college with 500-bed hospital in Talcher at the cost of Rs 492 crore.

The company has completed necessary formalities for construction of this medical college. The National Building Construction Corporation, a Central PSU under Union ministry of urban development would take up the construction work. 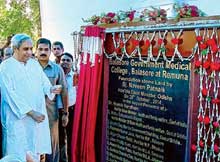 To meet fill up the huge doctors’ vacancy in the state, the state government has decided to set up more medical colleges.