The three stars – veteran Mihir Das, Satyaki Mishra and singer Trupti Das, expressed pleasure at being a part of the BJD.

Expressing happiness over the development Naveen Patnaik said the eminent artistes would be assets for the BJD.

“My family members are involved with the affairs of BJD. I was associated with entertainment but henceforth I will be with BJD,” Mihir Das told media persons. 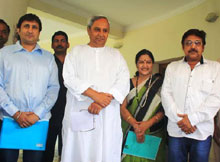 Trupti Das said, “My long-term loyalty towards BJD and its chief has attracted me to join the party.”

“I had joined the party five years ago. But now I got the opportunity to work more actively for the party as a worker,” Satyaki reacted to media when asked about his joining.