Puri girl Minati Sethi, who represents the Indian Railways team in national events, had bagged a gold medal in the senior women’s 58-kg segment at Apia, Samoa in June, 2012.

The National Games of India return after a four-year absence with the 2015 edition in Kerala, pitting the nation’s states against each other in a series of sporting events from January 31 until February 14. 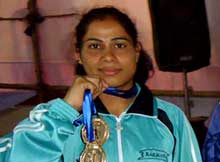