A mobile water purification bus has reached Odisha on Tuesday to help Cyclone ‘Fani’ victims get clean water. A similar bus was used to help the flood-affected Kerala.

The bus with a water purification system onboard has the capacity to purify 40,000 liters of water in a day. It will be used to clean any sort of contaminated water including dirty water from silt.

The 40-feet-long mobile water purification bus started from the coastal town of Bhavnagar in Gujarat. It was indigenously developed by the Council of Science and Industrial Research. The bus contained an RO desalination and ultrafiltration plant. It also has a TFC membrane filtration that filters viruses and bacteria from the water.

Cyclone Fani has been the strongest cyclone to hit India in 43 years. As many as 800,000 people were reportedly evacuated just before the cyclone made landfall in the eastern coast of India.

In fact, Bhubaneswar, the capital of Odisha lost over one million trees and 64 lives because of the deadly cyclone that came at a speed of 165-200km on May 2. However, there were no major casualties. 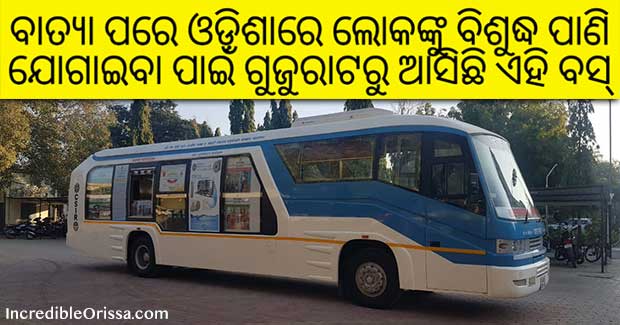