Destiny has forced award-winning bodybuilder and four-time Mr Odisha Rashmi Ranjan Sahoo to take to the street to sell ‘bara’ and ‘pakudi’ on a pushcart at CRP Square in Odisha’s Bhubaneswar.

Rashmi, 27, clinched the title of “Mr Odisha” for four consecutive years from 2013. He also bagged gold medals in many national competitions, including the Federation Cup, Ludhiana, in 2016, and Federation Cup, Patna, in 2018.

Rashmi was one of the star attractions at the recently concluded 15th State Senior Bodybuilding Competition here. He bagged a gold medal in the 80-kg category. He told that the greatest worry for him was to arrange funds for his bodybuilding expenses.

“Bodybuilding is a very expensive thing to do. But, I can spend very little on my food supplements and nutrition. I also need money to take part in various championships. The biggest problem for me is poverty,” said Sahoo, a master’s degree holder in Sanskrit from Utkal University.

“I need nutritious food that costs around Rs 15 thousand and food supplements – such as protein – that cost Rs 20 thousand every month. Earlier, I also attempted to contest for the “Mr India” tag despite my financial constraints, but stood in fifth position. If the government kindly considers giving me a job, that will really help pursue my passion and bring to the state more laurels,” he said.

Sahoo now lives at a rented house at IRC village in Bhubaneswar along with his family. (Source – The Telegraph) 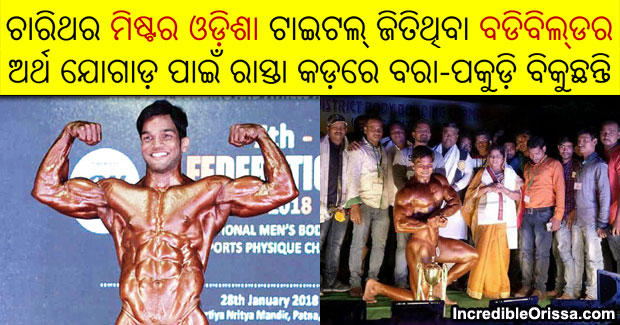