Satya Ketan Mohanty from Bargarh has a dream to establish a museum in western Odisha. He started collecting the antique artifacts at the age of 17 years and has amassed 7,500 rare items in the last 23 years at his residence.

His 7,500 rare antique items are divided in to 14 sections. He has collection of gold coins from the Ganga dynasty, coins of the Kushna dynasty, more than 100 and above fossils, rare seashells, rare musical instruments, arms and weapons, ornaments of tribal people, more than 350 rocks and minerals, more than 2,000 types of postage stamps, old envelopes, letters, palm leaf manuscripts, around 700 types of herbal dry products, old medal and mementos along with items that go back to the Buddhist period.

He said that he has been spending his total income in collecting the items. Many educational institutions of western Odisha have invited him to display his collection to their students.

While his house is a veritable museum, he has asserted that he will establish a museum in western Odisha in near future on his own which will help the young generation to know about the rich history and culture. (Source – Daily Pioneer) 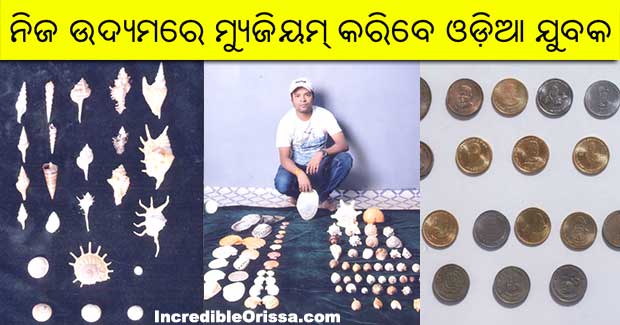