Talking to OTV at a place near the meeting venue, Linga said, “What was the need of engaging the military personnel here, when we have announced to organize a public meeting? If the govt thinks to nab me, I will not make this to happen.” 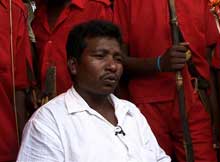 “I am ready to surrender but at the court only. I have been implicated by the govt in false charges which I want to tell my people,” stated Linga.

A large number of social activists and media persons had reached Narayanpatna this morning in anticipation of Nachika’s proposed meeting and his possible “surrender” to the court.