Actress Nandita Das interview in Odia, aired on Focus Odisha channel where she said about ‘DARK IS BEAUTIFUL’ campaign.

“I did not focus on this campaign much till I realized that it is viral in social media. Suddenly I started getting emails and media calls from all over the world. Then I became more sensitive towards the issue. I am happy that after the campaign the advertising council has changed guidelines and stricter norms were set for advertisements of products,” Nandita answered. 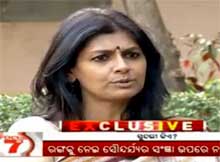 Nandita Das, who hails from Odisha, was in Bhubaneswar recently to attend the JDCA Film Festival.

Nandita Das is famous for her crtically-acclaimed performances in films like Fire, Earth, Bawandar, Before The Rains and also her directorial debut Firaq.